Scarteen has been a hive of activity in recent days as Hector Ó hEochagáin joined Chris, Sue, Emma & Jason to film a feature for his new RTÉ series; “Hector Goes.” The feature aims to demonstrate the place hunting has in life in rural Ireland and captured the family involvement in the field sport. Produced by Good Company Productions, the programme will air on RTÉ One on Monday 28th January 2013. 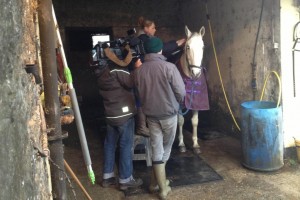 Sprite gets his make-up done!

The crew film our farrier in action!