“That stile is a pain in the neck!” said commentator and host Chris Ryan echoing, in more moderate language, the thoughts of most riders on Wednesday as the Future Event Horse League returned to Scarteen for the second time this season.

Coming up as fence four, the stile was certainly the bogey fence on the four year old track and out of the 23 starters, only the first 3 in the results and the unplaced Lost Laugh Lewis managed to achieve the maximum 144 points for jumping.

The Ryan family had hoped for near perfect ground conditions for this qualifier but heavy rain on Monday and Tuesday nights put paid to those aspirations. However, the Derby arena held up well and the decision to transfer the dressage arenas into another field paid dividends as, although they weren’t perfectly level, horses were not bogged down.

With just one qualifier remaining, Neville Jessop’s home-bred Sallymount Oscar has the four-year old league tied up but the Oinri Jackson ridden Condios gelding had to settle for third place here on 302.4.

Ridden for owner/breeder Alice Kehoe by Louise Codd, the Ramiro B gelding Westwinds Hercules had let connections and supporters down in the main arena at Dublin but impressed in the derby arena on Wednesday and completed on a score of 312 points. Jo Dudley took second place on Kieran Furlong’s Rosheen Diamond Imp whose total of 303.6 was helped by his “winning” ridden display mark of 90. 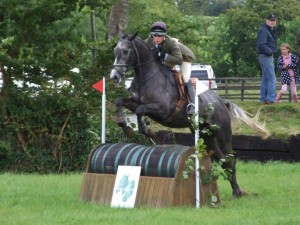 The 2008 League champion OBOS Kristoff is bidding for a double but has only four points in hand over Stellor Rebound who missed this week’s qualifier where Mary Kehoe’s bay gelding was well ahead after the ridden display with 97 points. Even with two fences down, the son of OBOS Quality 004 still held a good margin at the finish (347.2) over Jimmy Fanning’s Anjo Lucky Clover (327.8).

By Clover Echo out of a Huntingfield Rebel mare and bred in Co. Antrim by Patricia McKinney, Anjo Lucky Clover produced the only clear round in the five-year old section. The grey gelding was partnered by English rider Camilla Kear who is based at Scarteen.

John Bannon was back safe and sound from his South African horseback safari to partner his own Remax Royal Touch into third place, the black Touchdown mare finishing on the same score as the runner-up.

It was certainly a red letter day for Oldcastle’s Nicky Galligan who landed the RDS young rider’s speed Derby qualifier on his first attempt at anything competitive other than hunt chasing and hunter trialling.

Galligan, who is soon to commence on a foundation degree in equine management at CAFRE in Enniskillen, was riding the six-year old Beggy’s Gold on whom he was clear in 136.44, some way ahead of the second-placed Pleasant Cherry Blaze (Madeline Roberts Allen) who also came home without jumping penalties in 145.75.

Beggy’s Gold, a chestnut gelding by Ard Ohio, was evented last year by Kim Dalrymple, from whom Galligan bought the horse two months ago having hunted him over the winter. While delighted to have the chance of receiving training, riding in the main arena at the RDS won’t be a new experience for Galligan as he was on the Ballymacad team which won the Equestrian Direct Sales Hunt Chase at the Dublin Horse Show earlier in the month.

When the action ended on Wednesday, the hunting-mad 18 year-old, who also went home with over €400 in cash, was given a tour of the Scarteen kennels by Master Chris Ryan. It was a busy few days for the Ryan family as the Black and Tans held their Puppy Show the previous Friday.